Watchmaking, Covid, economic crisis… it’s like we’re back in the 70’s and it’s time for design to come back?
EG: Yes, it’s like during the Oil Crisis, when things can’t get worse, we’ve nothing more to lose.
AP: I hope you’re right; when copying isn’t enough, you need to create something new.

Apart from Ikepod, what are the most creative brands around today?
EG: Fashion designers – because they don’t have the watchmaking legitimacy to prove.
AP: The very essence of fashion is ephemeral, it’s liberating.

What do you think of the hunt for “icons”?
AP: Today the watchmaking brands all want the same thing, to create an icon. But it just doesn’t happen like that. You create something and then a spark needs to ignite. The brands need to take more risks.
EG: That’s exactly how it was with Stephen Urquhart at Audemars Piguet with the Royal Oak Offshore. An icon, it’s a model which stays alive, and a model which keeps a brand alive. Back in the beginning, in the 1970’s, Georges Golay (Managing Director of Audemars Piguet, editor's note) didn’t like the Royal Oak, but he still took the risk to produce it for the Italian market.

Isn’t the concept of an icon just a by-product of marketing?
AP: Yes, but making a success is a stroke of luck.
EG: Marketing kills creativity.
AP: The principles of marketing aren’t exactly compatible with the luxury market or even with the idea of creativity. The only valid objective is to offer customers what they don’t expect.

What’s the way forward?
EG: The brands need to create the icons of the next 40 years, not copy the success of the last 40 years.
AP: Not copy, but seek inspiration and then improve. Just making another ‘’me too’’ is a waste. However, if you take something and transform it, you are adding creativity. Just like creating new flavours for a signature dish.

Why is it important to leave a model to mature in the client’s opinion?
EG: Time is of the essence. Icons and success develop with time.
AP: I completely agree. And you have to accept the failures too. No one takes the time to study the flops and yet no project is 100% bad. You can’t run after success if you don’t know where you are going wrong.

Are Ikepods the exception in being icons from day one?
EG: Exactly, Ikepod really earnt its icon status straight away. But it wasn’t necessarily an easy commercial success.
AP: A bit like in cinema, Ikepod belongs to one of the masterpieces that the public only discovers later on.

Has the relaunch of Ikepod with one of its most emblematic models come at the right time with the right message: to take your time in an industry where everything goes too fast?
AP: Yes.
EG: I agree. Watchmaking is going too fast and it’s not by going faster that it will get better.
AP: More like the opposite. EG: The sector has grown too fast, and business has become artificial. Watch speculation and watch auctions are a symptom of this aberrant situation. There is no more logic. No more old models, just practically new watches. We don’t leave watches the time to improve with age.

Is that just like passing the responsibility onto you as the designer to create another success?
EG: They don’t even ask us to do that anymore. They just ask us to remake a Royal Oak Offshore…
AP: Most of the time, the brands don’t even look to define their own identity, they’re happy enough just to benchmark a competitor.
EG: It has become a farce.

Before you styled your own versions of the Duopod, Chronopod and Megapod, what did Ikepod mean to you?
EG: A UFO. A designer’s project, rather than a ‘’watch designer.’’ At the time, the term watch designer didn’t exist. (In French, editor’s note) they were called watch stylists, not designers.
AP: We’re just pencil pushers! But it’s true that the Ikepod was a UFO. And a very stylish UFO; as soon as you see a Megapod you want to touch it.
EG: That’s true, it’s sensual. And a nice watch should always be nice to touch.
AP: I distinctly remember when Ikepod arrived, it was daring, creative, different… and expensive for the time. In my personal benchmark Ikepod has always been in a good place.
EG: It’s not as clear for me. I was in my own world and the internet was far from being as developed as it is today. I left Audemars Piguet in 1999 to work for Fossil in the United States, in a creative team where the others didn’t come from a watchmaking background. Ikepod was a bit like that and when I started to look at their watches, I liked them straight away.

Ikepod watches for less than 1000 USD, justified or not?
EG: When Christian-Louis Col (current owner and CEO of Ikepod, editor’s note) sought me out, I immediately understood his idea for repositioning with prices much more accessible than in the past.
AP: The previous positioning was much too high. The price could only be justified by the esthetics of the object. Particularly today.

Are the new Ikepod watches still luxury objects?
EG: It is essential for Ikepod. Luxury products need to be perfectly proportioned, elegant, well-made and affordable.
AP: I agree. Luxury is above all a beautiful object, not a simple consumer product.

Where were you in 1994, when Marc Newson launched Ikepod?
EG: I was with Audemars Piguet where I was working on the Royal Oak Offshore, in full creative effervescence.
AP: I was with Cartier and designing my first watch.

How does one redesign a watch by a designer as charismatic as Marc Newson?
EG: By not touching anything. By improving the dials. Being satisfied in making aesthetic adjustments. That's all. Most importantly, we did not alter the case, nor its proportions, it is perfect as it is.
AP: It is a task of humility. Undertaking a job like this is incompatible with an oversized ego. Especially since before me there was someone called Gueit... it adds pressure.
EG: As a freelance designer, my main concern is to make the customer happy. The brand first.

Is it important to study the history of the brand and its creations?
EG: It’s absolutely essential in my opinion. You have to immerse yourself in the genetics of the brand, see what Marc Newson created. This is how I was inspired for the dial with the circles, it is derived from an old motif, but on a less rigid grid than the one at the time.
AP: In actual fact I got goaded into it. The first time Christian-Louis Col asked me to design an Ikepod, I told him no. Then he asked me if I would design a pair of sneakers… and I ended up accepting to develop the dials for the Megapod. He wanted to put numbers on them, so I tested everything from Roman numerals to Arabic numerals… It wasn’t easy because there was the flange which had already been redesigned by Mr Gueit.
EG: The flange is essential, otherwise the dial becomes a hole.
AP: I totally agree… so I made an absurd proposal to put the numbers underneath the flange. And the proposal was accepted.

It sounds like your work on the Ikepod seems more like an exercise in style.
AP: Not more than any other mission. Design is always progressive, a process of concentration, like like a funnel from which only a few elements from a much denser work emerge.
EG: We work without counting our hours, we are passionate about what we do…

Is design really about team work?
EG: Yes and no. Creativity is very solitary work – we all have a certain degree of Asperger’s syndrome. After that, it is important to listen to the client.
AP: It is with dialogue that creative work takes on its meaning. The client’s explanations are important, as is his or her vision and what he or she likes or doesn’t like. But when there are too many people, everything becomes complicated.
EG: There are too many decision makers in this profession…
AP: And in the end, it doesn’t pay to avoid risks.

Let’s be realistic: given your seniority (laugh), you learnt your profession with pencil and paint. So are you more 2D or 3D?
EG: Definitely gouache and 2D. 3D annoys me.
AP: It is to our advantage to have learnt with the pencil.
EG: Work by hand creates errors, and errors create ideas. You don’t get errors with a computer.
AP: I find that 3D imagery has made dialogue with the client problematic. When you look at a sketch or painting, you need to see where it’s going, visualise the watch, imagine it. With 3D, the client can only see the computer outlines, that’s all. With 3D there is no extrapolation.
EG: That’s true. The gouaches of the Royal Oak Offshore were very naïves, but that didn’t stop the CEO from believing in it. Actually, all the iconic watches of today were designed by hand.

Don’t you think that 3D imagery has the advantage of eliminating flaws?
AP: That’s exactly where our work begins. As I always say to my students (Alexandre Perraldi teaches at the Haute École de Design in Genève, editor’s note): no compromises, just solutions.
EG: Sketches form the basis for technical discussion with the engineers.
AP: This brings us back to the notion of time we were talking about. When you come across a problem, taking your time to resolve it will enable you to find a much better solution.

Mr Perraldi said before that he tested all the possibilities, even Roman numerals on the Megapod. Was it really necessary to test everything?
AP: I forbid myself to forbid anything. And it’s not without risk, the client can always choose the worst proposal.
EG: But at one moment or another, the client needs to trust the designer.
AP: Exactly. The client needs to believe in our experience… it’s not because it’s beautiful that it will sell.That’s a lesson I learnt from Alain-Dominique Perrin (at that time CEO of Cartier, editor’s note), who would look at my designs and would say: “What is this? It’s ugly… but it’s going to sell.”

How many watches do you own each?
EG: 1, 2, 3… many!
AP: To tell you the truth, I don’t know.
EG: In 33 years, I would have designed around a million watches. When I as at Audemars Piguet, it was a particularly creative period and we designed three new collections a year.
AP: Idem. When I started at Cartier we designed countless collections.

Do you think this streak of hypercreativity will return?
EG: I think it will come back. As the brands become more important than the models, they will also become more creative.
AP: With creativity we can make a model live for twenty years.

Good news for Ikepod. Another reason to believe in a third life?
AP: I think it’s feasible. Its failures gave the brand time and will contribute without a doubt to its success today.
EG: I hope so, that’s what we worked for.

Interview by Stéphane Gachet, Watch Around. 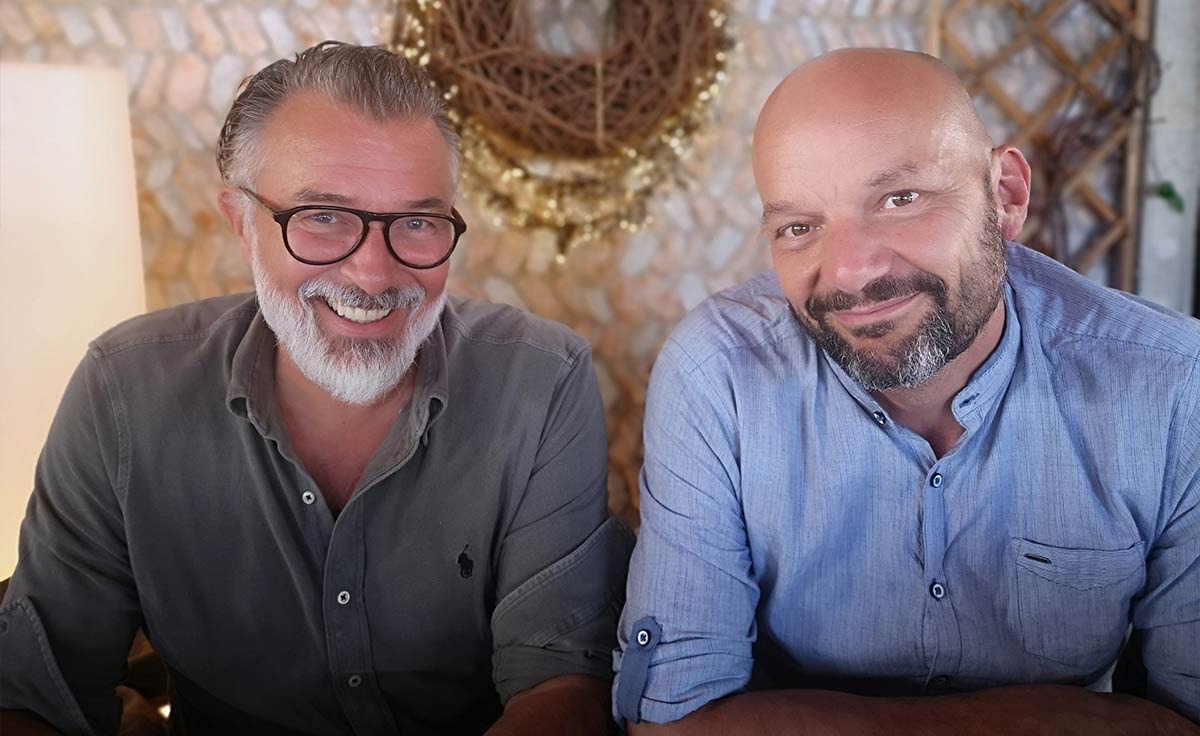